Hello there sky gazers!  The weather seems to be holding out this Spring.  But do not worry, there is still plenty to see in May…if the clouds let up of course.

Some of us are counting the days until the Full Moon on May 16th, also known as the Flower Moon.  That means the New Moon phase is at the end of the month and will probably be the best time to star gaze.

But first, what do we know about May’s Full Moon.  Also known as the Planting Moon, Milk Moon and Hare Moon, May’s Full Moon is named after the abundant number of flowers that come out this time of year in the Northern Hemisphere. Now to the good part…this year’s Full Moon will be totally eclipsed and turn red, which by definition is known as a Blood Moon for the color it gets during this time.  It may be difficult for us here in the East to see it (of course) but will be visible to the west coast and may be seen by others if possible.  The great thing about this lunar eclipse is the totality, or period where the Full Moon is covered by the Earth’s shadow.  In total it will be about 1 hour and 25 minutes after Sunrise.  So lookout West Coast, you will have a treat between 8:29 – 9:53 pm.  Yes East Coast this means it will be far too late for us to see.

Our May Meteor Showers are not the best here in CT, maybe if you head North a bit you can catch the Eta Aquarids.  They are usually active between the end of April and May every year, peaking in early May.  Look for Aquarius in the night sky as the radiant or point from where they emerge from.  The meteor shower is another result from Comet Halley, the second occurrence happening in October.  If you want to try your luck, head out early morning around 3:00 – 5:00 am to see what you can catch.

The best part about our Solar System is that you can catch a glimpse of something up there.  A galaxy, a planet or meteors but there is something always lurking.  Have you come across the Starlink satellites?  These look like a star constellation and move very fast in a line like ants.  If you haven’t, keep looking up! 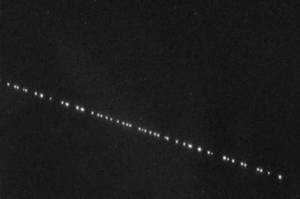