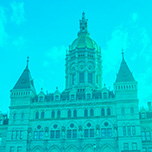 The 2016 session of the General Assembly opened today (Wednesday, February 3) with Governor Malloy releasing his proposed budget adjustments for the year starting July 1. State revenues are still below what was expected for the current year, and the situation looks even more bleak for next year with a shortfall of $570 million or three percent of the state budget. It is clear that there is no appetite for raising taxes, and so the result will be cuts in staff and services.

What does this mean for after school funding?

The specifics are unclear,** but we do know that there will be cuts, and that people who care about state funding for after school and summer programs will have to make their voices heard loud and clear if it is to survive.

Here’s how you can help:

** NOTE ON PROPOSED BUDGET CHANGES: The Governor’s budget proposes a radical change to the way the state would manage its spending. It eliminates many line items, rolling the funding into a single line item for each department called “Agency Operations” which would be up to the Commissioner of each department to determine how to spend it. And then he proposed decreases in the total amount for each department, so the commissioners would decide what gets cut. The General Assembly will not likely support this change, which essentially eliminates their power over specific line items, and so the ball is now in their court. The legislature has three months, until May 3, to negotiate and pass a state budget. So now is the time to act!

This site uses Akismet to reduce spam. Learn how your comment data is processed.